Sightseeing tours in Washington, D.C., can be organized around a variety of themes. For example, a Presidential Tour might visit the Jefferson Memorial, the FDR Memorial, and the Lincoln Memorial. A Smithsonian tour would take you through the various museums on the National Mall. A customized tour that honors veterans and their service to our country would include at least the memorials below. 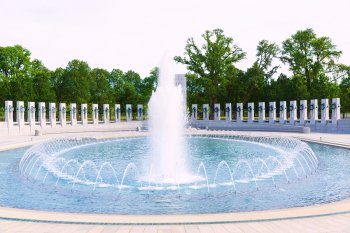 The National World War II Memorial took three years to build, and it was officially dedicated on April 29, 2004, by President George W. Bush. It stands at the east end of the Reflecting Pool on the National Mall and includes a central fountain surrounded by granite columns. The Freedom Wall of Gold Stars honors the lives that were lost during the war, and two towering pillars commemorate victories in the Atlantic and Pacific theaters.

Covering 2.2 acres of land southeast of the Lincoln Memorial, the Korean War Veterans Memorial contains a haunting set piece that evokes the realities of war: 19 statues, slightly larger than life-size, represent a military squad on patrol. Polished black granite walls stretch out on either side, forming a V that points toward the Lincoln Memorial. At the tip of the V, there is a circular Pool of Remembrance, inscribed with data on the numbers of soldiers missing, wounded, killed, and taken prisoner, both from the U.S. and the 22 U.N. countries who sent troops.

This iconic memorial contains three parts: the Vietnam Women’s Memorial, the Three Soldiers statue, and the powerful Vietnam Veterans Memorial Wall. On the wall, the names of more than 58,000 soldiers who were killed or remain missing are inscribed across nearly 500 feet of black gabbro rock, with a nearby directory allowing visitors to locate specific names.

Washington, D.C., tours such as war memorial tours are always more streamlined when they are organized by a professional company that takes care of transportation and scheduling for you. Call Haymarket Transportation at 301-778-2007 to learn more about our services or make a reservation online today.

If you’re planning to take a day trip to Washington, D.C., there are three destinations, in particular, that might interest you: the White…

People often think of the attack on Pearl Harbor as the first time America was attacked by a foreign nation. But that’s not historically…